Mentioned in my previous Blog, an exhibition we’ve been curating with Mary-Beth Lavoilette titled: A Family at War: the Lougheeds, Calgary and the First World War.

The exhibition grows out of the culmination of a career and a family dedicated to public service during the Great War, before and beyond. The challenge: how to tell the vastness of the story in only 60 objects?

Like any exhibition, it began as a coincidence between the vision of the curators, the objectives of the institution (Lougheed House Conservation Society) and the hoped for interest of the visiting public.  It is also shaped by fragile circumstances, such as limited budgets, resources, and time.

Happily, the past few weeks have marked an exciting moment in the development of the exhibition: we’ve been working with designer Elizabeth Carey bringing together spaces, surfaces, colours, and graphics to support and reveal the stories in the exhibition. This is when things started to become tangible: when the idea becomes a reality.

A tight installation schedule. Given we had only a few days to hang the show, object placement is planned down to the hour.  Yes. We’re nearly there. Installation is almost complete.  Three months have flown by and the calendar says only 2 days left until we open the doors…. The clock says 48 hours!

We were just remarking how difficult it is to obtain original printed propaganda from the Great War in good condition, when, lo and behold…

Spent the morning looking at two very interesting original colour lithographs at Aquila Books, here in Calgary. Both posters are for an exhibition we are co-curating with Mary-Beth Lavoilette for Lougheed House (Beaulieu) National Historic Site titled A Family at War: The Lougheeds, Calgary and the First World War. 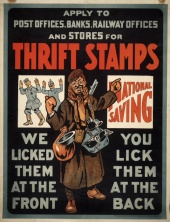 Canadian War Bonds were first issued in November 1915, and later called Victory Bonds, they helped finance military operations in World War One.  For each issue of Bond, a poster was produced urging citizens to buy them. For those who couldn’t afford to buy War Bonds, War Savings Certificates were available.  Thrift Stamps, were directed at children, by accumulating stamps they could use them to buy Bonds.

How Many War Bond Posters Were Produced?
This question is not easy to answer as print runs varied from only a few hundred to many thousands and, with no centralized authority being responsible for production, keeping track of numbers is an impossible task.  It can be certain that hundreds of thousands were printed and found their way onto billboards, into store windows, factories, and essentially anywhere people gathered.

Printing of war propaganda posters meant a huge increase in business for major firms in Toronto, Hamilton and Montreal, as well as for graphic designers, who often remain anonymous and therefore are not credited for their creations.

All images Courtesy of Aquila Books