After conservation, the flag that inspired Princess Patricia’s Canadian Light Infantry returns to PPCLI Hall of Honour at The Military Museum, Calgary.

Military objects comprise a large portion of the conservation work undertaken here at the LV.Greyes Partnership. In the past few years, our conservators have worked on a number of historically important projects from the regimental galleries at The Military Museum in Calgary, including several regimental colours…

On the 10th of August 2014, Princess Patricia’s Canadian Light Infantry celebrates its 100th anniversary. In recognition, funding by Canadian Forces has provided an opportunity for the regiment to redevelop its gallery at The Military Museum. With temporary removal of objects, it was decided to evaluate the condition of the Regimental Colour.

Colours are important symbols of a regiment’s identity. This one, the Ric-A-Dam-Doo with its iconic VP cipher, possesses a special significance. Unique, the Colour was made by Princess Patricia herself more than 100 years ago, and was carried in every regimental action during World War I.

Given its age and original use, the PPCLI Colour is in remarkable condition. This is largely due to an earlier treatment carried out by textile conservator Gail Niinimaa, who cleaned, aligned, and mounted the flag on a solid support covered with fabric.

So as not to physically destabilize the Colour, the initial stage in treatment was surface cleaning. This was carried out through protective screening using a vacuum fitted with a soft brush with reduced suction to clear particulate build up. The brush moved in a step by step, row by row manner, so as not to damage the fragile silk fabric and metallic embroidery and gold bullion fringe.

Second part of the treatment was to position and secure the Colour to the existing mount, primarily through the support fabric, with some hand-stitching through and around the outer edges. Next the raised appliqué VP cipher and gold bullion fringe was repositioned and secured. Both treatments were executed with ultra-fine mono-filament silk threads.

To protect from dust and accidental soiling, the mounted Colour was reinstalled in its Plexiglas case. Returned to the Hall of Honour at the Princess Patricia’s Canadian Light Infantry Museum, the Colour is again available for public viewing. 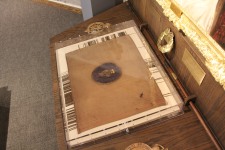 LV.Greyes Partnership is proud to have worked with Princess Patricia’s Canadian Light Infantry, helping to preserve the historic collections, and in celebrating the Regiments century of service to Canada.

Princess Patricia’s Canadian Light Infantry was founded by an act of philanthropy by Captain Andrew Hamilton Gault in August 1914, who offered $100,000 to raise and equip a battalion for overseas service at the outbreak of World War 1.

The Regiment bears the name of HRH Princess Patricia of Connaught, a granddaughter of Queen Victoria. Her father, HRH Prince Arthur, Duke of Connaught and Strathearn was Governor-General of Canada 1911-1916. Princess Patricia designed and made by hand the regimental flag: crimson with a circular royal blue centre embroidered in gold with the initials V P (Victoria Patricia) her personal cipher, which became known as the Ric-A-Dam-Doo (Gaelic for “cloth of thy mother”).